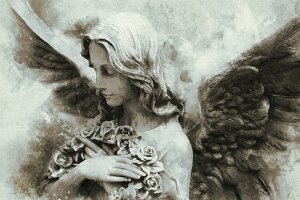 Bernadette A. Ruggiero, of Staten Island, NY, passed peacefully in her sleep at the marvelous age of 97. It is a blessing to pass on from natural causes, and to live such a long and happy life. Bernadette was born and raised in the Flatbush neighborhood of Brooklyn, NY. Growing up in a large family during the Great Depression was not without its challenges, but there was so much love in the home. Bernadette had five sisters and one brother to whom she was very close. Throughout her childhood, she attended Catholic school, she made excellent grades and was a great student who loved to learn. In 1940, at age 16, she volunteered in a factory during WWII to make goods for American soldiers: she, like so many of her generation, did her part for the war effort and believed in the cause. She met her future husband during this time. Moving out to Long Island in 1956, was a highlight in her life: she enjoyed those years and raising her children. After being a mother and homemaker, she worked for Metropolitan Life Insurance for 32 years, in the World Trade Center. She found it very exciting to work in the city. Bernadette enjoyed time with her family, who took road trips to Cape Cod, Block Island, Martha’s Vineyard, Virginia, and Canada. She delighted in traveling over the years: she was considered the reader of the map, a fantastic copilot for countless adventures. Throughout her life, Bernadette enjoyed being a homebody in her own element. She was an avid gardener of plants and vegetables. She enjoyed playing games on the computer such as FreeCell and Monopoly. She lived by the simple things in life. She read countless books over the years, and truly appreciated reading, especially books by John Grisham. Bernadette is survived by her son, Gregory, seven grandchildren, and ten great grandchildren. She was predeceased by her daughter Margaret and her son Gene. Her committed and loving son Gregory took care of her for many years, until the very end, and was her solace. This sense of devotion is such a rare gem. Few people are so content in life, and so extraordinarily pleasant: Bernadette was forever a positive person, accepting of and helpful to others, she was the epitome of peace and happiness. She possessed the quality of shyness but was also gregarious and full of life. She made for excellent company for family and friends. Bernadette loved to laugh and laughed often: this is one factor that led to her living just a few years shy of a century. Family and friends will be received at the Martin Hughes Funeral Home, 530 Narrows Road S in Concord, on Saturday 8-930 AM. A mass will then be held for Bernadette at Saint Ann's Roman Catholic Church in Dongan Hills at 10 am, followed by the committal at the Moravian Cemetery.

To send flowers to the family or plant a tree in memory of Bernadette Ruggiero, please visit our floral store.

A Memorial Tree was planted for Bernadette

We are deeply sorry for your loss - the staff at Martin Hughes Inc. Funeral Home

Join in honoring their life - plant a memorial tree